NEXT SLIDE
BACK
Next Project : ETERNAL DAMNATION
SCROLL 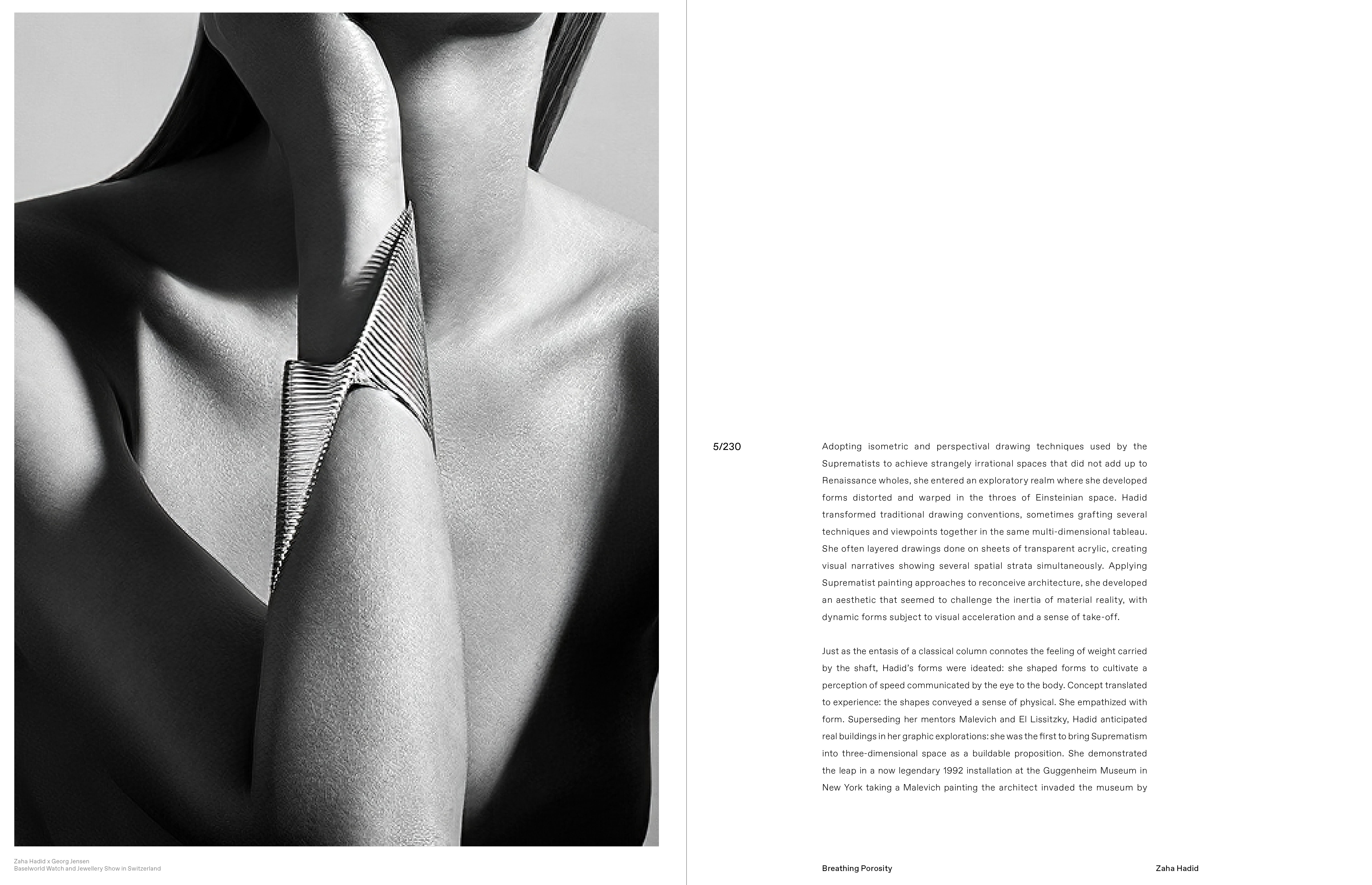 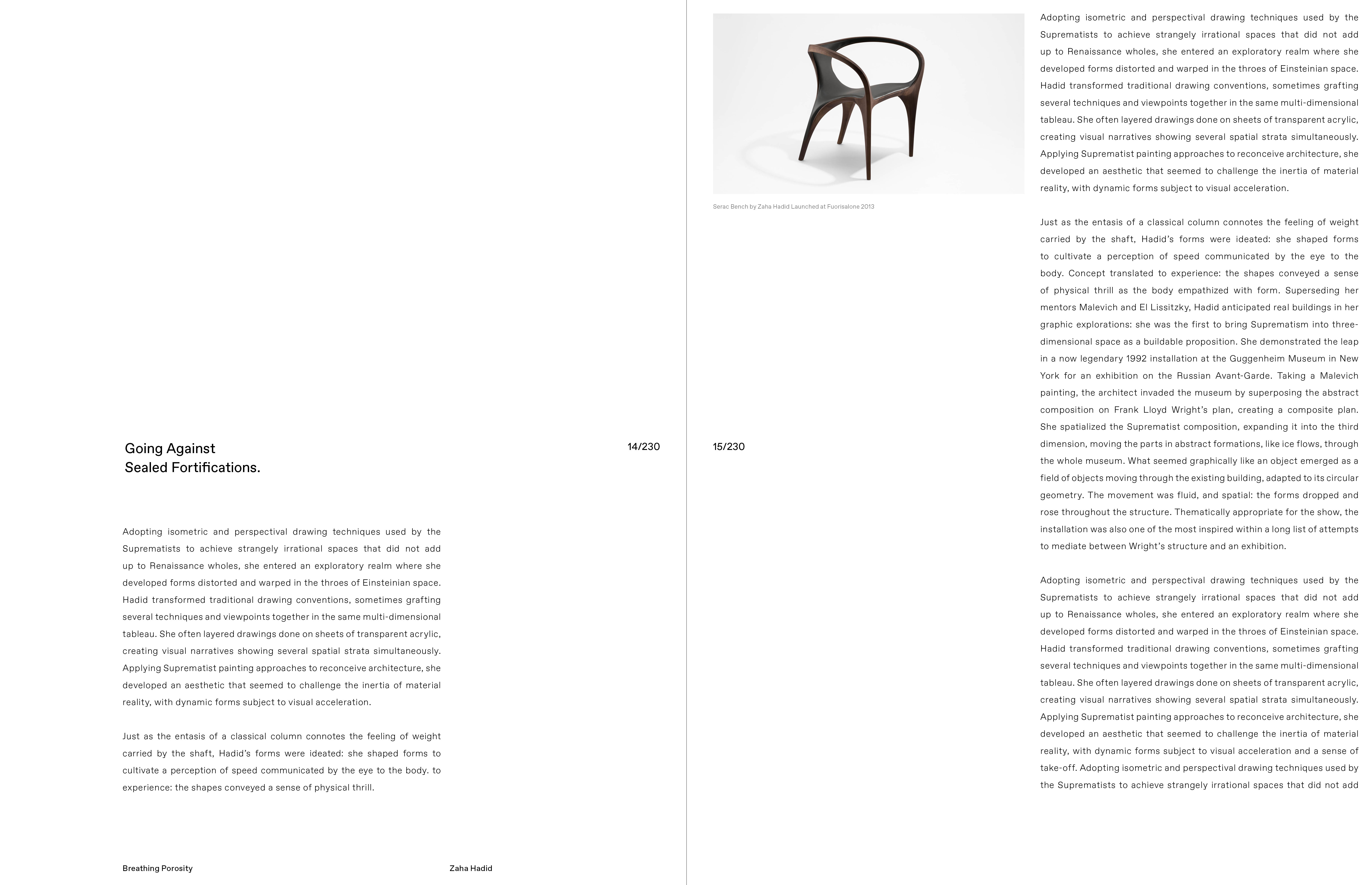 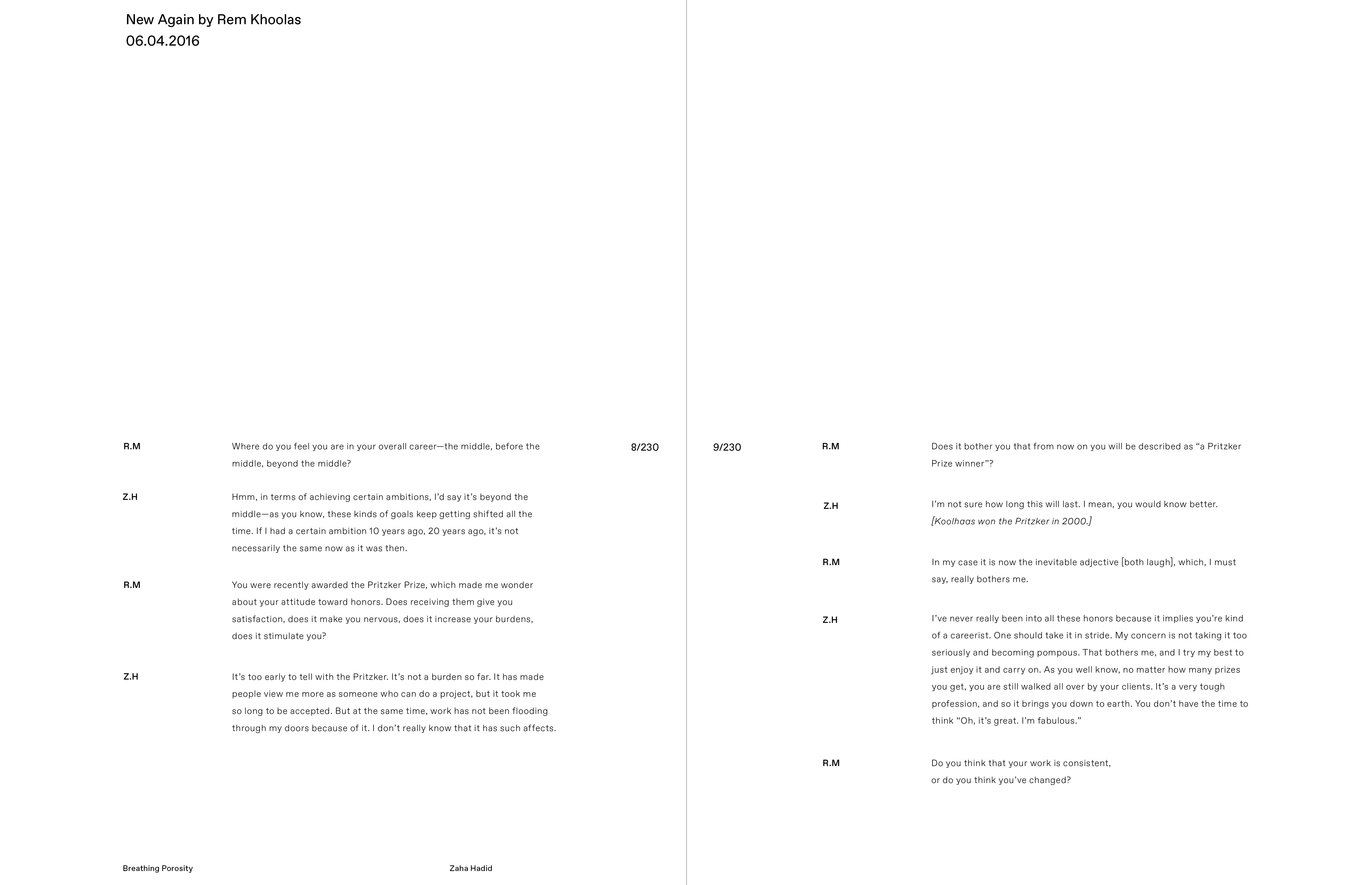 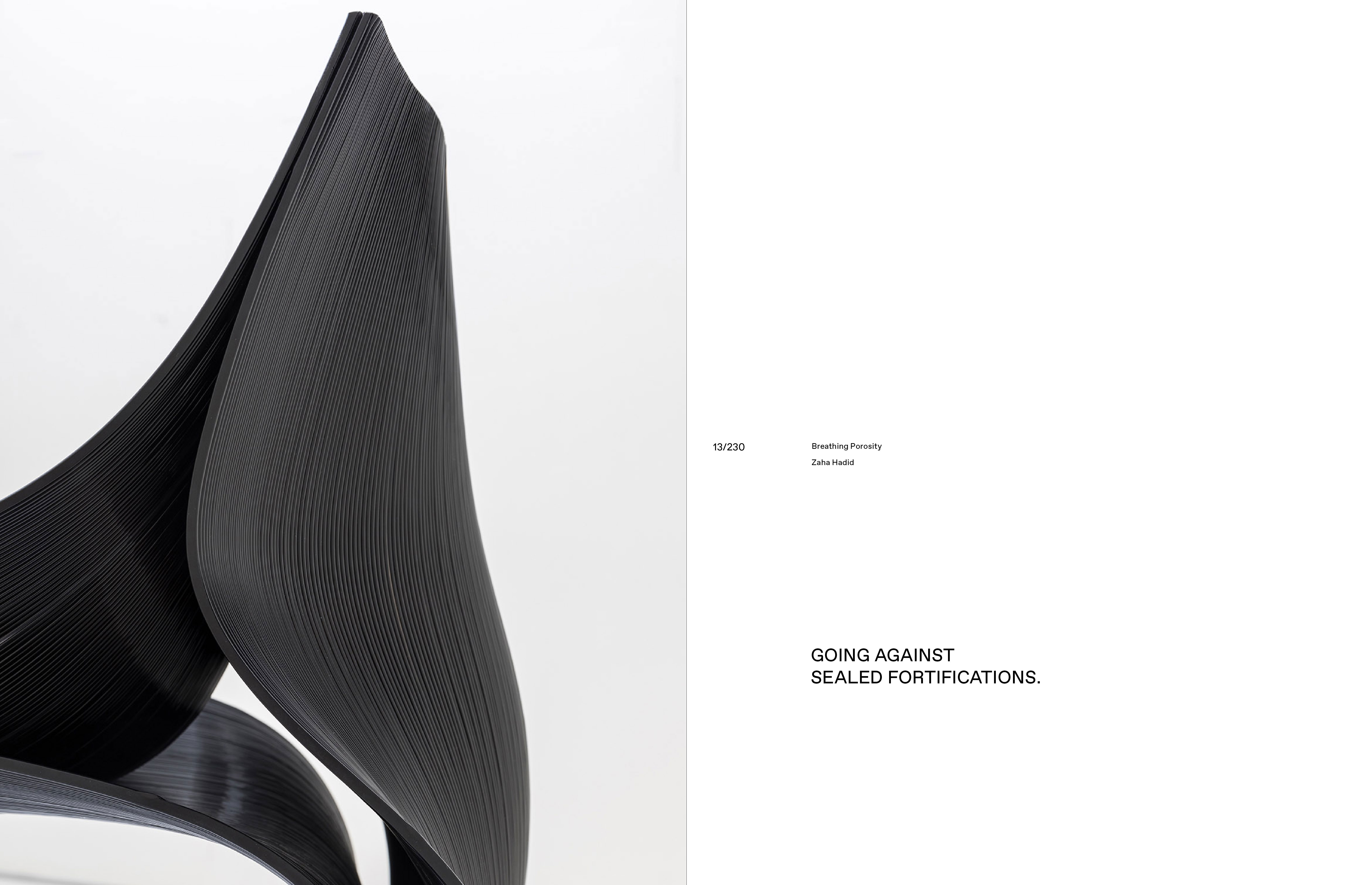 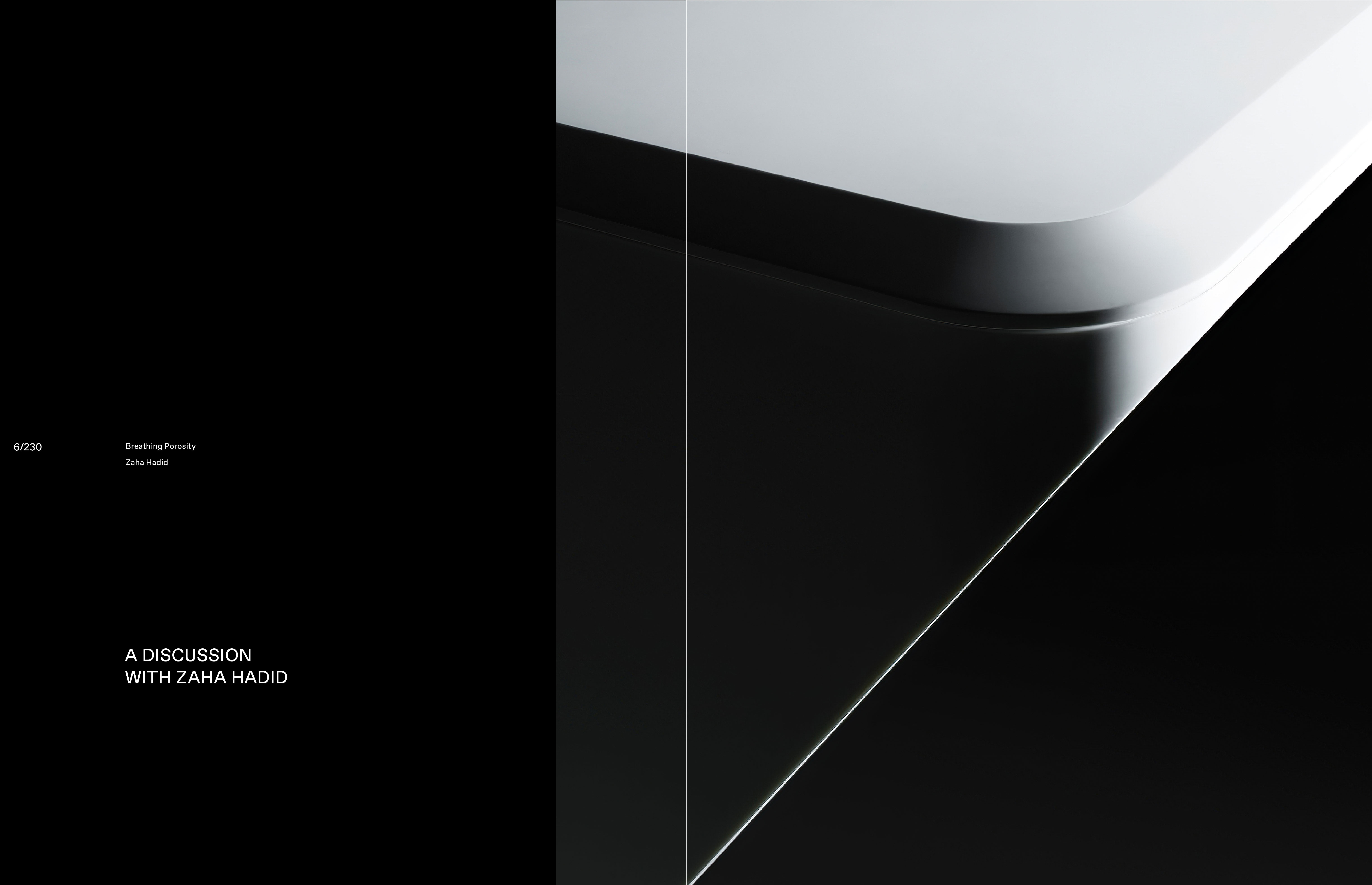 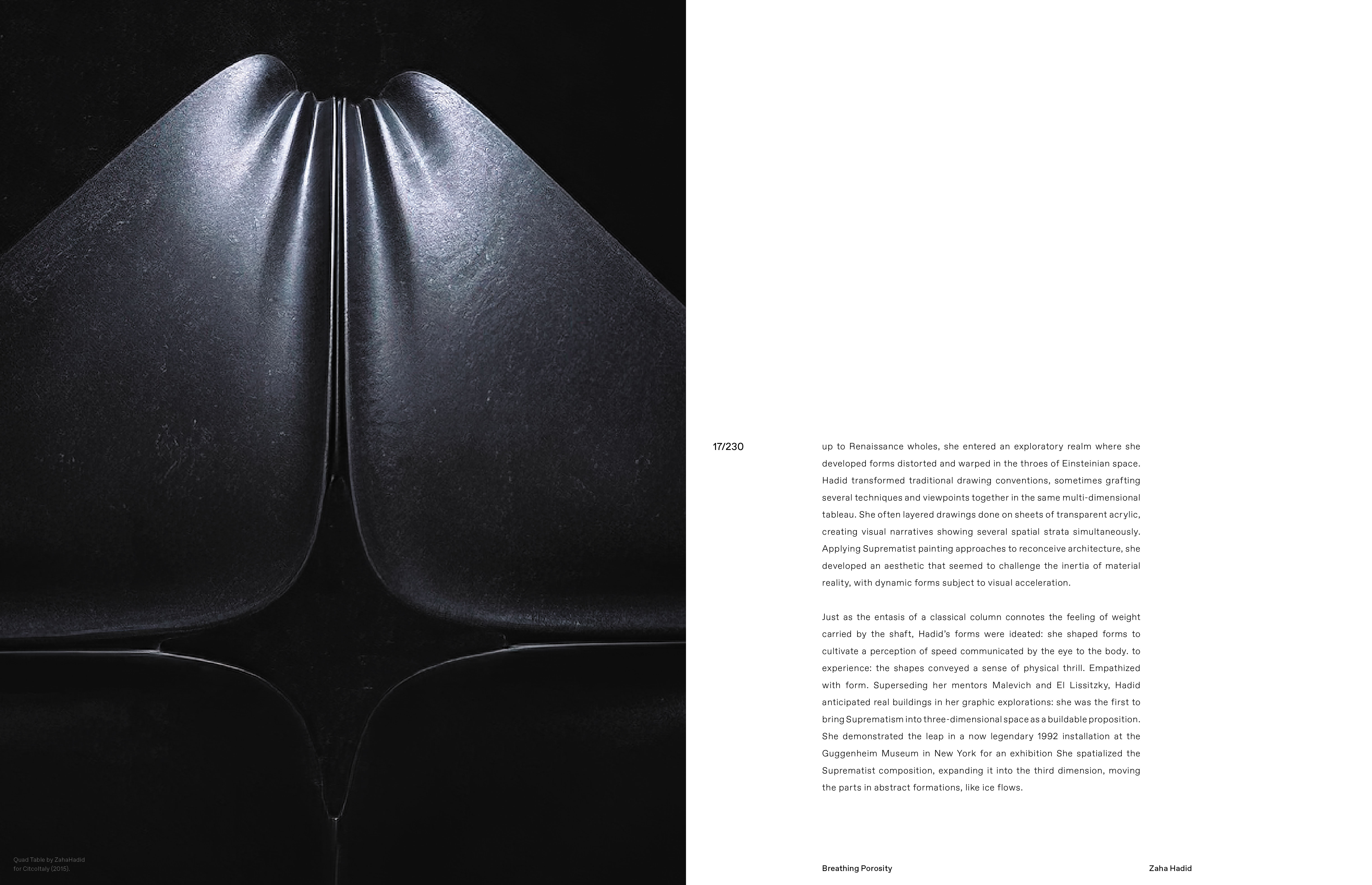 Through extensive research on Zaha Hadid, and her design philosophy, Iquickly realized the importance of creating a physical structure in order todepict her innovative mind properly. That being said, I decided to focus onHadid’s product design catalog as the foundation for the following piece.

The idea was to create an avant-garde yet functional bookcase as the bookcover itself based on the title “Breathing Porosity”. The concept of utilizingnegative space in architectural forms is one of the main elements found inHadid’s work, which I tried to communicate through this product.

That being said, the result is a bookcase that can also hold one’s bookmarkthanks to the two ends in the center interconnection and essentially actingas the holder of a bookmark. Moreover, considering this would be found inart galleries, I intended to create an impactful piece as much of Hadid’s workis breathtaking in it itself.

An identity rooted within the intention of developing human outcomes. Inherently to the core of this premise lives the word function. An ideology that can
be depicted through a specific structure; dialogues seeking to push design forward through specific intentions.


‍
Much like the spirit, these intentions should be engaged with caution and therefore given high value.

please direct all inquiries to: jonathanjimeneza@hotmail.com+ 514.984.4833

The social structure of the twenty-first century can be said to rely on consumerism, a state of mind influenced by parties of higher institutions infiltrating into the day to day individual, a moral construct that praises the excessive acquirement of goods. Through the application of this ideology, one loses the capability of discerning between the essence of beauty and the unnecessary, which results in the disempowerment of design’s core as a whole. By undermining the importance of rectifying this way of life, impactful design cannot be achieved. Only when realizing that decoration (the inessential) destabilizes the purpose of design, which is to impact its surrounding society whether that be through political, physical, or social mediums can one fully practice the art of design.


More specifically, decoration takes two forms which are analyzed through different perspectives; the first one being in the realm of creation where decoration is represented through the addition of elements that do not possess a defined functionality and secondly, in the realm of life which is reflected by the overconsumption of futile belongings. Subsequently, these two factors (life & design) intertwine when recognizing that one cannot coexist without the other. This is seen through the desire of constantly “wanting more” as a destructive behaviour harming our capability of seeing beauty for its simplicity and therefore affects the way we create.


Decoration pushes us away from functionality, and functionality pushes away decoration. Within the process of creation, when conceptualization or, in other words, purpose, is not the critical element within a design, it is then that the inessential is introduced to the canvas, which substantially limits us from impactful creations. One must realize that where there is a purpose, there is beauty. A creation without use does not reflect the true essence of beauty. A substantial example that comes to mind is the nineteenth-century folk art movement, an artistic concept that valued utilitarian objects over aesthetics. Within that period, specifically in Japan, folk art was represented through handicrafts that were mere utilitarian objects that showed the highest degree of development.


With that in mind, for the development within the design practice, we must continuously create by prioritizing utility over visual appeal. Only when that is applied can design genuinely affect humanity. The same way handicrafts reflected a bond between beauty and the common people, design should seek to impact individuals of society, and that can only be achieved through the relationship between beauty and functionality. That is to say, an architectural institution that does not prioritize human livability, a collection that does not consider the human anatomy or a network system that lacks compelling social interactivity no longer serve their designated purpose but rather fall in the category of decorative design. Put merely; aesthetics should follow meaning, not the other way around.


Today’s social framework centers around technology, although a fundamental tool for designers, in many ways, contributes to one’s desire to continue buying beyond our needs. With algorithms put in place to bombard us with “essentials,” which are mostly superficial needs, it makes one question how technology can affect designers of the twenty-first century. This modern-day capitalism leaves young designers with the inability to value an object for its essential nature, resulting in the belief that they need the next big thing before even appreciating what they currently have. As the Japanese philosopher, Soetsu Yanagi states, the more an object was used, the more its beauty became apparent; a concept that is no longer thought to this generation.


In addition, excessiveness causes a creative financial allusion making the designer live with the idea that exorbitant equipment leads to powerful design when, in reality, authentic and effective creations can be accomplished with the simplest of means. With that being said, I firmly believe life should be lived through simplicity to appreciate the essence of things. If designers of the present fall in what I call “creative consumerism,” they will adopt the same mentality of continuously adding to their life into their creation process, which inevitably leads to design without reason and function. This unsustainable way of life and way of designing has translated into a habit that causes no positive impact on our society; therefore should make designers reassess accordingly towards the way they approach life as a whole. Habit robs us of the power to perceive anew, much less the power to be moved.


Freedom of perception is imperative to move forward with the idea of functionality as the main component of impactful design. The realization that we possess the freedom over creative and existential decisions will allow designers to grow and acquire new perspectives on how to create meaningful pieces that will impact the individuals around them. From my point of view, freedom represents the door to evolution. Through this power, one can outgrow the structure society has established for our lives, design can reach a whole new spectrum, life can be lived sustainably, and generations can aim for higher degrees of success. The Edo period between 1603 and 1868 perfectly reflects the power of freedom as utility began to be focused over the merely decorative, which could not have been possible without a new-found freedom of perception from the individuals of that time. Designers should seek beyond aesthetics and start implementing purpose; only then will the twenty-first century witness a shift from “aesthetically pleasing” visuals to constructive design.


My hope for design is that it reaches a new dimension where society is positively affected by the creations of designers. Although I am not saying impactful design does not exist today, I believe more designers should be given the opportunity to understand how to leave a mark within society appropriately. One must not forget that design is a global practice where individuals are encouraged to elevate our world, whether through the development of graphics, edifices, garments, or products. The power of design is not to be underestimated, nor should designers underestimate the importance of their creations.